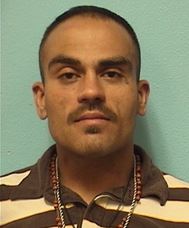 Las Cruces police are asking for the public’s help in locating 30-year-old Jaime Talamantes who is suspected of Friday’s fatal shooting of his own brother.

About 12:30 a.m. Friday, May 22, police were dispatched to the report of a shooting on the 500 block of Mulberry Avenue. Officers arrived to find 31-year-old Juni Talamantes suffering from at least one gunshot wound. Juni Talamantes was transported to Mountainview Regional Medical Center where he succumbed to his injuries.

Las Cruces police investigators learned that Juni’s younger brother, Jaime Talamantes, was responsible for the shooting. Jaime Talamantes fled the area before police arrived and his whereabouts are not known at this time.

Jaime Talamantes is 5-feet-11-inches tall and weighs approximately 190 pounds. He has brown hair and brown eyes. His last known address was on the 4700 block of Dona Ana Road. Investigators have obtained a warrant for Talamantes’ arrest. The warrant charges Talamantes with one count of murder.

Talamantes is believed to be armed and should be considered dangerous. Anyone who knows his whereabouts should refrain from contacting him and, instead, should contact police immediately by calling 911.